[MA] The First Gift: A Story Inspired by the Object from Wellcome Collection

Our class visited the Medicine Man exhibition at the Wellcome Collection in London last Tuesday. The fourth project of the illustration practice unit was based on the object we found from the exhibition. We’re going to produce narrative-based illustration using Riso prints. The illustration should be without words but we’re asked to write the story down first. I’d like to share my story with you here so that you’ll understand the illustration better after I created them. 🙂 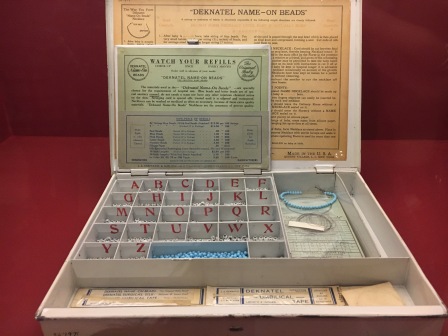 Title: The First Gift
Story:
An elderly man found an old box while he was organizing his room. When he opened it, he found a small bracelet with his name on it. On the blue and white beads wrote: M, David. This little bauble reminded him of the story he learnt from his parents.

David’s mum, Jenny, was pregnant. She and her husband, Peter, started to think about the name of the baby. As they are both Christians, they decided to name their baby boy David after the great King David of Israel. When David was born, he received a bracelet made of blue and white beads with his name on it in the hospital. After years when David was not a baby anymore, Jenny kept the bracelet in a box for him.

The old David smiled and wiped the tears from his eyes. He took the bracelet downstairs and put it on his newborn grandson’s wrist. The baby boy was named after his grandfather.

I named the characters after my parents: Jenny and Peter, and my brother, David.

I’ve always believed that our names are the first gift from our parents.

If you were an old reader of my blog, you might notice that I focused on the end of life on my last project and created a picture book titled “The Last Letter”. This time, I wanted to focus on the beginning of life. As a result, “The First Gift” would be a reflection or somehow in the same series of the last project.

I’ll share the process and the final outcome with you here in my YUEHtopia blog. Please subscribe this website via email if you liked to know more about my work. Thanks a lot! x

Thank you very much for visiting and reading my blog. See you soon!